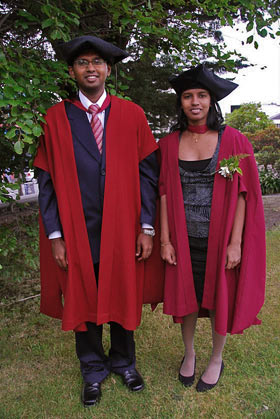 Thanks to the world-leading work of Otago’s Distributed Computing & Software Agents Research Centre, the parents of siblings Tony and Sharmila Savarimuthu boarded a plane in Tamil Nadu, southern India and travelled to Dunedin last December to see their children graduate with Information Science PhDs in the same ceremony.

As software agent specialists both Tony and Sharmila say they were drawn from India to Otago due to the Centre’s reputation.

“Otago is the only New Zealand University with an active research group in this area,” says Tony. “It is very well-regarded and I think it’s only becoming stronger.”

Tony describes software agents as “autonomous software entities that can act on behalf of the user”.

“They are human-like in the sense that they have the social ability to communicate, can learn from their experiences and can also reason about their objectives and pursue their goals.”

Older by four years, Tony arrived in Dunedin first, in 2003, having already earned his Master of Engineering (Software Systems) in India. Three years after embarking on his Otago PhD research, Tony also became a lecturer in the Information Science department, teaching second to fourth year papers.

Meanwhile, Sharmila had completed a Masters degree and an internship at a software company in India, and was contemplating whether to continue in the workplace or with further study.

Knowing that the availability of scholarships for promising international postgraduate students represented an opportunity for his sister, Tony suggested to Sharmila that she apply to the department. She was successful in getting a PhD scholarship, and arrived in Dunedin in 2006.

“I found Otago very multicultural, especially in my department,” says Sharmila, “and the staff/student culture was very different. In India there is a big separation between staff and students, but here you are more like colleagues. That aspect I really like – you can have your say.”

Sharmila likens the supervision of her thesis to a family relationship, given that she shared Tony’s own primary and secondary supervisors, Dr Maryam Purvis and Professor Martin Purvis, with Tony acting as her third supervisor.

With the completion of her own PhD, entitled ‘Socially-inspired mechanisms for restricting exploitation of artificial agent societies’, Sharmila says she is now exploring where her studies could take her.

“Really,” says Tony, “our PhDs are a ticket to the rest of the world.”