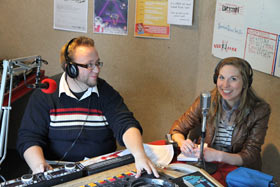 A new radio show for postgraduate students is proving a popular addition to the programming at Radio One, the University of Otago’s student radio network.

‘Rush Hour’ is the brainchild of postgraduate student Thomas Köntges. The mix of interviews, lighthearted satire and music runs every Wednesday from 10am to 12noon on 91fm (live streamed on r1.co.nz).

Thomas, a doctoral student in Classics, explains that he proposed the show when Radio One was seeking ways of getting more students involved in the station’s broadcasting. The idea was positively received and, after some quick training, he was sitting behind the control desk for the first broadcast on 18 January. Since then he has been joined by Science Communication postgraduate student Zoe Patterson Ross, who interviews other postgraduate students, as well as Tegan McKegg and Josh Kennedy, who participate in a satirical feature ‘Ask the Postgraduates’.

Response to the initiative so far has been largely positive, and the show has a growing following both on-air and online. Of course Rush Hour has a life in social media that almost eclipses its on-air presence.

Previous broadcasts are available at mixcloud.com while the interviews are always available after the show on postgradradio.tumblr.com. You can also follow the show on Twitter or Facebook.