Standing out in a crowd 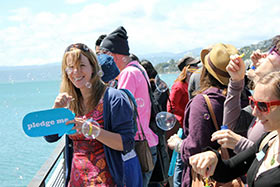 It’s a long way from an undergraduate degree in English Literature, minoring in German, to starting your own web company and turning it into a New Zealand leader in its class.

Anna Guenther, who grew up in Dunedin and is part-American with an accent to match, travelled from words to her website, www.pledgeme.co.nz, thanks to her postgraduate degree – a Master in Entrepreneurship from Otago.

She had considered doing postgraduate work straight after her BA at Otago, but went away and worked for five years instead, keeping her plan for more education in the back of her mind.

It was while working as a project manager for New Zealand Trade and Enterprise that postgrad work became more pressing. “In order to get ahead in my career I could see I needed business skills.”

The Master in Entrepreneurship looked like an “interesting” way to obtain those skills, and had the added attraction of being taught by distance.

“That was a big selling point; that I could keep working as well. I knew I needed it to get ahead. I never suspected it would lead to me starting my own business.”

Following entrepreneurs overseas she had come across crowd funding, which is when small to medium projects are funded by asking a lot of people for a little bit of money.

Big American site Kickstarter is the most famous of existing sites, but there was nothing in New Zealand.

“So I decided to look at the idea as a good topic for my Masters. It still never occurred to me that I would start my own crowd funding site. Then during my research I found a web developer starting out in the crowd funding space, and we decided to work together.”

PledgeMe raises  half a million

In early October PledgeMe hit a total amount raised of half a million dollars, spread over dozens and dozens of small projects ranging from bands putting out CDs to calendar production.

“It’s growing exponentially and our success proves there is a need.”

PledgeMe was started while Anna was completing her Masters, and still working part-time.

“It was a challenge. The content of the course was good, and the access to real business mentors was the best thing about it. I really value the network of mentors, classmates and lecturers that I’ve developed as a result.”

Doing it by distance proved equally challenging. Anna found herself a café with no internet access and bottomless cups of coffee in order to finish writing her thesis.

Next up for this talented entrepreneur is raising $100 million through the website in the next five years. “We think it is not only sustainable but could be expanded to fund raise in more areas than the community and creative space.”

Find out more about the Master of Entrepreneurship at the University of Otago.