Aiding the cause of peace 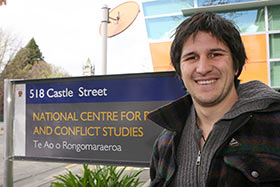 What happens when one country gives aid to another – what form of peace does it create?

Paul Bedggood, formerly of Christchurch, is working on this topic while studying for a Masters in Peace and Conflict Studies at the University of Otago.

He’s not long back from a year in Africa, where he spent about ten months working with Volunteer Service Abroad as a teacher and community worker in Mozambique and Zambia. He has also just completed an internship with NZAID (a New Zealand government department which delivers half a billion of taxpayers’ funds annually in aid).

It was these two experiences that led to Paul’s thesis topic: over the past decade NZAID has undergone two major policy and structural transformations and he is looking at how these shifts in policy will impact upon the recipients of NZAID.

National Centre for Peace and Conflict

After growing up on the West Coast of the South Island, he studied International Relations and Diplomacy at the University of Canterbury before heading overseas. However, when it came to his postgraduate work, New Zealand’s National Centre for Peace and Conflict was his first choice.

“For a start, Otago is the most prestigious postgraduate university in New Zealand, but what particularly drew me down here was the Peace and Conflict Centre and the interdisciplinary nature of its work.”

“I think it’s beneficial for any department to have that diversity, and not just in the fields of study, but to have researchers and students from around the world.”

Plus, Paul says, he’s never worked in such a supportive and social environment: “There’s a particular focus upon creating an inclusive, non-hierarchical study environment. So I’ve felt really welcome here.”

Paul (Ngāpuhi) has had assistance from Otago’s “great Māori support network” which has offered him research seminars, monthly hui, writing workshops and a forum for meeting other postgraduate Māori students.

On top of all that, he’s fallen in love with Dunedin, he says.

“Having several beaches, beautiful native bush and areas like Fiordland and Central Otago on your doorstep has been amazing.”

Having undertaken a “massive learning curve” in postgrad work – “you really learn a lot about yourself as it’s such an individual process” – Paul is now tossing up between a job in Papua New Guinea, heading back to work for the Government or tackling a PhD.