Firing the imagination with PhD on German fairytales 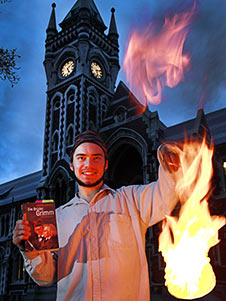 The chance to take a love of fantasy literature and mythological adventures and turn them into serious postgraduate study is a privilege German language student Tama Braithwaite-Westoby has seized with both hands – it even inspires his theatrical fire juggling.

Working within the University of Otago’s Department of Languages and Cultures, Tama is in the midst of researching his PhD thesis concerning the 19th century fairy tales of the Brothers Grimm, entitled ‘The Brothers' Grimm Kinder- und Hausmaerchen in Light of Modernity’.

Tama says, “The crux of my project deals with the evolution of the tales from the first moments of their conception at the hands of the Brothers Grimm, to the last versions of the tales published during their lifetime. I’m looking at how the tales reflect aspects of the notion of modernity, a term which refers to social changes from Old Europe to the emerging modern era, and how the tales act as 'agents' of this change simultaneously.

“I have always loved fantasy literature and studying mythologies like that of the Greeks and Egyptians. My studies allow me to carry out a serious study of what makes up these kinds of tales, and discover their origins and the connections the German fairy-tales have to those from other cultures.

“Doing a degree in languages has allowed me to travel to Germany twice on exchange, once as an undergraduate and once in my Honours year. Just recently I received a Doctoral scholarship from the DAAD (German Academic Exchange Service) to research at the Humboldt-University in Berlin for six months.

Tama’s theatrical side has also been receiving an education at Otago. Since 2006 he has taken part in most of the German plays staged annually by his department and in 2008 he began fire juggling with the Fire and Circus club at Otago’s Clubs and Societies building. He now belongs to fire-juggling troupe The FireBugs Inc., performing at fire-shows, festivals and creating 'fire-theatre' productions.

When asked if his studies and fire juggling have ever crossed paths, he enthuses, “Indeed, yes. Last year I co-directed a fire-theatre show for the Dunedin Fringe Festival incorporating fairy-tale elements such as the classic notion of good versus evil, dark versus light, and heroes and demons to make up the story of the show.”

Born in England, Tama spent most of his childhood in Dunedin. Although he had the opportunity to study elsewhere, he found it a natural choice to study at Otago near family and friends.

“Looking back over the past years, not all has been easy, but I love where things are going.”