A is for art, z is for zombie 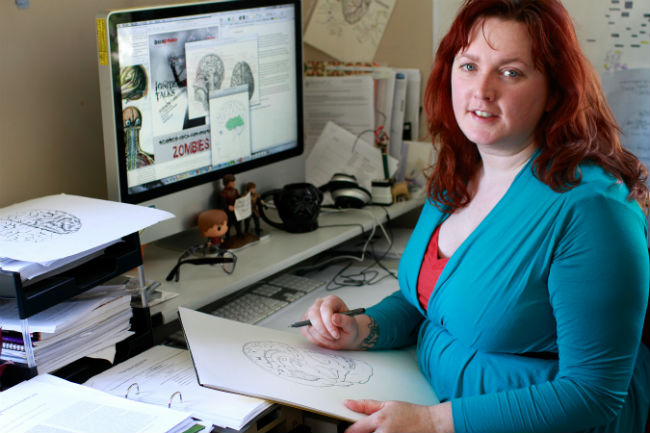 Q: What do a PhD, zombies, Ireland, Otago, and learning through art all have in common? A: Ann Cronin.

Ann is a University of Otago PhD candidate researching how drawing affects learning. She is also a director of the inaugural, and highly successful, DunDead Festival, held earlier this year.

Hailing from Ireland, Ann moved to Dunedin to study with Otago Vice-Chancellor, Professor Harlene Hayne, and Dr Julien Gross, both of the Psychology Department.

The Northern European recession had made living in Ireland too hard, and as New Zealand would give a work permit to her partner, Ann had started looking for interesting researchers here.

“I got a few replies. And I got a no from Harlene, who said she was too busy as she was the Vice-Chancellor. If I had known she was president of the university I would not have even dared approach her! I was shocked she had even emailed me back. Then a week later she changed her mind.

“It’d always been a massive dream to go to New Zealand, and everyone I spoke to said it was a beautiful city, Dunedin. And it’s true.”

Ann’s study looks at ways of teaching that promote drawing through incorporating them instead of seeing them as an aside – “art shouldn’t be relegated to an hour on a Friday afternoon”.

She believes drawing skills provide an environment for the next generation to solve problems, and are translatable skills to problem-solving in other disciplines, giving people the ability to develop creative solutions which address a range of questions.

Although she has been working on her PhD for less than a year, Ann has already completed one study, creating a neuroscience module for preteens piloted in a local school, which taught 11-year-old kids about the brain – one class drawing in their workbooks and one writing in them.

“It turns out from this small study that there wasn’t much difference, but the biggest surprise was that you can teach 11-year-olds about neuroscience…”

From neuroscience to zombies

Neuroscience was part of the driver for her Zombie festival.

Discussions with a colleague about some of the important questions around zombies – what is their legal status, for example – snowballed into the idea of a zombie walk, which converged with other ideas into a pop cultural/science festival. Dundead combined science lectures from diverse areas of science (from maths and stats to genetics) which explored questions around zombies, with the world premiere of the New Zealand feature film I survived a Zombie Holocaust, a zombie walk and a zombie flash mob.

“None of us believe zombies are real, or possible. But there is real and relevant science, such as epidemiology, and statistics which model diseases – we are using zombies to bring understanding of science to a lot of people who wouldn’t be exposed otherwise.”

Connecting art to learning and zombies to science seem set to make Ann’s next couple of years busy ones.