From apprenticeship to Master's degree 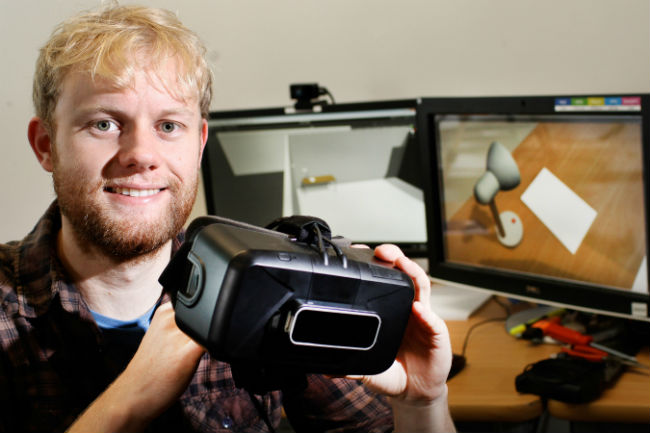 Completing an electrician’s apprenticeship turned Jonny Collins on to learning in a way high school never did, starting him on a path to an Otago Masters researching 3D interactive augmented reality.

“To generate a 3D virtual environment we use a head mounted display with two monitors, one for each eye. You feed images of the real world into that display and overlay an augmented virtual world on top of that. You want the virtual content to align perfectly with the real world.

“Some of the problems we encounter while creating these augmented realities haven’t been overcome yet. Essentially, I’m trying to identify all the problems so people coming into AR research know what to expect in different scenarios or different applications.”

Jonny says there is a myriad of applications for AR technology in health, education, gaming, industrial manufacturing and more.

“For instance, AR is used for stroke victims with impaired limb function. They ‘see’ their arm functioning normally, helping their brain reform the required connections to eventually make that movement real.”

Getting help from supervisors

Jonny says his Information Science supervisors Associate Professor Regenbrecht and Dr Tobias Langlotz have been incredibly supportive of his research.

“Holger grabbed a funding opportunity for me, a Callaghan Innovation Scholarship , which connects my research with the technology development company iMonitor in Auckland. Its CEO Robin Alden is another of my supervisors. The scholarship also puts you through a professional development plan and teaches you about business.”

Eventually, Jonny would like to apply his skills to education. Part of his departmental involvement includes helping run information technology workshops for high school students. When combined with his own school experiences the workshops spawned ideas for a future project looking at how augmented reality can help provide for a wider range of learning styles than he feels curriculum-based education systems offer now.