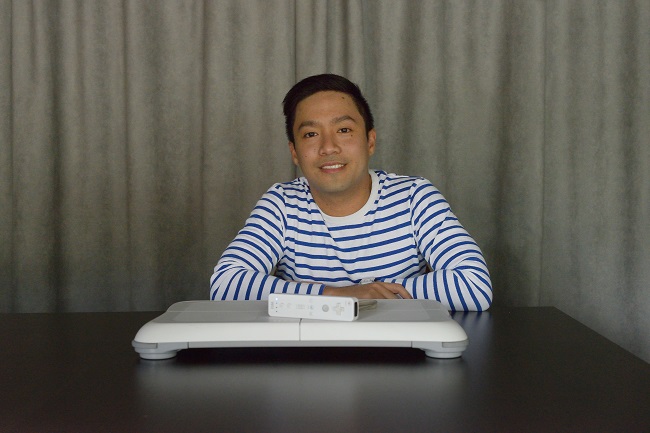 Donald Manlapaz says gaming technology is often blamed for turning people into couch potatoes, and is seen as the domain of a younger generation.
However, the University of Otago PhD student is challenging both assumptions with his research into what is known as “exergaming”.
Specifically, he is looking at the effectiveness of using the Nintendo Wii Fit balance board to improve the balance of people with knee osteoarthritis (typically an older population) and lessening the risk of falls.
Donald says the Wii Fit is affordable and also fun, which is important for improving adherence to exercise. “If you’ve ever been to a physio you’ll know some exercises are boring for some. This will actually motivate the user.”
He says it is important to translate what is done in the game into everyday activities. Other key issues he will investigate are safety and ease of use, such as how easy it is for an elderly person to set up.

He is working on establishing the first-ever recommendation for balance exergaming protocol.
“We have protocols for strengthening, aerobic exercises and endurance, but combining gaming and exercise? There’s no standard protocol and hopefully Otago will have the first one.”
Donald worked as an assistant professor at the University of Santo Tomas in the Philippines until May last year and started at Otago in July.
He first met researchers from the University of Otago's School of Physiotherapy at an Amsterdam conference in 2010, after finishing his Master of Science in Physical Therapy at Santo Tomas. It was too soon to consider further studies then, but when he met the same people at another conference in 2013 he decided to make the move.

He had heard good things about Otago, including its long history of offering physiotherapy and the high calibre of its researchers. He says working with the academics at Otago is a privilege.
“For me it was about rubbing elbows with the giants in physio. While it is an honour, at the same time it’s a responsibility. It’s a responsibility to deliver, together with the assistance of the supervisors. The supervisors are so very welcoming and embracing.”
“Doing a Phd is not only focusing on your specific niche; research here is a community. [Postgraduate accommodation] Abbey College has been so good to me. It is so convenient and talking to people who are not in my field who understand my project is a good thing.”