Master of juggling work and study 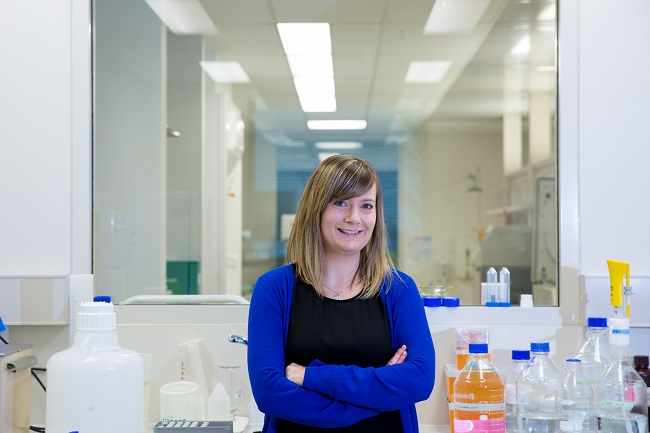 Jacqui Edwards cheerfully says pursuing a Master of Applied Science while working 40 hours a week is “a special kind of crazy”.

Jacqui has worked for Invermay-based Genomnz™ (AgResearch’s commercial DNA testing laboratory) as a customer service representative and analyst since 2014. As a person who often “feels the need for a challenge”, she asked her employers what they thought of her doing further study.

“I came across the Master of Applied Science (MAppSc) in Science Innovation and Enterprise, a brand new coursework degree, which AgResearch were happy to support me with.”

“I contacted Dr Stephen Sowerby [Senior Research Fellow and Director of Applied Science] who told me about the course, what it offered and entailed. My employer and I then came up with a suggestion for my research topic that could be useful for GenomnzTM and Stephen helped make it into something academically viable. Stephen also helped me explain to my colleagues what my project entails, because my master’s research revolves around work being done at AgResearch.”

Jacqui’s research topic involves taking a sophisticated piece of science and explaining it to an audience who may not have a background in the topic. Specifically, she is looking at a complicated DNA fingerprinting method based on new single nucleotide polymorphism (SNP) based technology for deer genotyping, which will provide clients with reliable parentage testing, genomic relationships and breed composition.

“Genomnz™ is in the early stages of the work, looking to roll it out commercially within the year. My research project will help me understand what can be offered with the new technology, which in turn will make it easier for me to explain to our clients."

Jacqui says the MAppSc programme gives you common sense, practical ways to approach science commercialisation, such as looking at how you would approach patenting if you had an inventive idea rather than doing the research alone.

The programme can be completed in 12 months or in stages, making it flexible for employed students such as Jacqui, who chose to complete her course over 18 months. Jacqui has also been able to transfer relevant completed papers from a Forensics Masters she began in Perth, Australia a few years ago to her MAppSc, simplifying her ‘special kind of crazy’.