Threatened amphibians at the heart of PhD 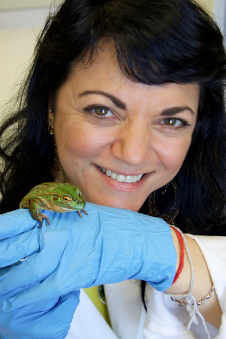 Originally from Brazil, with a Masters on Biodiversity Management from the University of Kent, England, Leida grabbed the chance to have Otago Zoology’s Professor Phil Bishop as her PhD supervisor, knowing him to be one of the world expert in amphibian research.

“We met at the World Congress of Herpetology in 2008,” Leida recalls. “I was teaching secondary school science at the time and he said if I ever decided to pursue a PhD I should get in touch.”

In July 2014 Leida acted on Professor Bishop’s suggestion, deciding to take her passion for amphibian conservation and begin her project on raising people’s awareness of global amphibian declines.

“I hope that by targeting young people and improving the messages around amphibian declines, I will help produce a cohort of young adults in the future with a greater empathy for the plight of amphibians.

“My project involves analysing different conservation interventions that can mitigate further amphibian declines, such as formal, non-formal and informal education, media and social media, as well as the published literature.

“Amphibians are facing terrifying rates of extinction. They are disappearing before our eyes, with 43% of all known species under threat. The causes are many, mostly caused by anthropogenic factors. Their decline has a huge impact on our ecosystems, on us in particular directly and indirectly. For some species is already too late, so something else needs to be done, beyond just trying to remedy the situation.”

“With some aspects of the project, such as working with secondary schools, it is difficult to work internationally due to the geographical locations, so I am only researching within Dunedin (here I must thank Kaikorai Valley College, Queens High School and Otago Girls’ High School for their support.) I am researching zoos worldwide. I have visited zoos in the UK, Brazil and New Zealand. Most of the other research I conduct through social media and by email, Dunedin has an amazing internet resource for that.”

As an international student, Leida says some of the support she has received at Otago, e.g. through the Student Learning Centre, is the best she has known. She also says Professor Bishop’s belief in her work has led to many opportunities.

“I am a Program Officer for the International Union for Conservation of Nature Species Survival Commission Amphibian Specialist Group. I am also producing an i-Book about New Zealand frogs in collaboration with Professor Bishop. All this would not be possible if it wasn’t for his support.”

Find out more about studying with Otago's Department of Zoology.