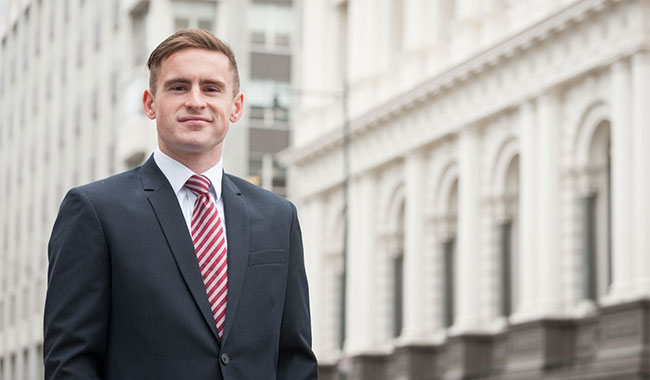 The two are connected, as James says a four-year degree is a standard requirement for such positions and investment banking is where his passion lies.

James, who hails from Wellington, was one of two New Zealand and 30 Australian Goldman Sachs interns last summer, having been selected from a pool of more than 2,000 applicants.

“It was a great experience and a steep learning curve,” James says, and he is looking forward to joining the 16-person New Zealand team next year.

James describes investment banking as similar to being a realtor, but for companies. “It’s buying, selling, raising finance, IPO’s and mergers and acquisitions.”

He is particularly looking forward to starting his career in New Zealand, as while the local investment banking market slowed after the global financial crisis, it has since been stimulated by such moves as the government’s listings of its energy companies.

James chose Otago for his study because of its reputation for academic excellence and for the social focus.

“I think what we learn at Otago is to adapt fast and learn quickly, and I’ve found employers value the soft skills you get here.”

He also found a strong sense of camaraderie among Otago graduates, with several already working in the Goldman Sachs office.

For his Master’s this year, James is planning on a three-month research project rather than the applied project option offered, as he’d like to keep open the possibility of further study at PhD level.

However, he is most likely to take the opportunities of working for a global firm, and the possibility of travel. The world awaits.

Find out more about the Master of Finance degree