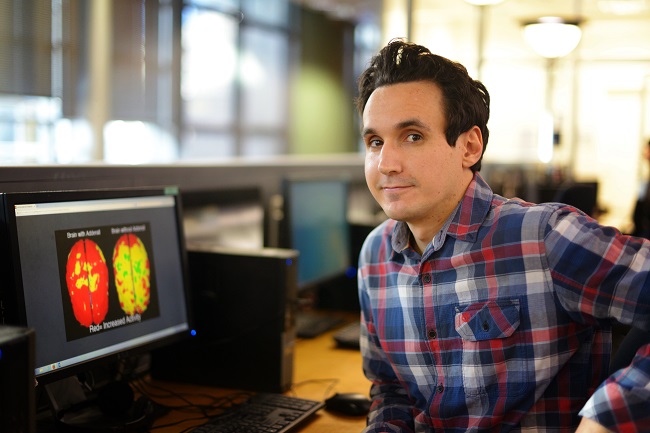 How did Egyptian former journalist Hazem Zohny, a socially active University of Otago PhD candidate delving into the philosophical questions behind modern cognitive enhancement, decide to come to Dunedin?

Based within Otago School of Medicine’s Bioethics Centre, Hazem is investigating ethical issues behind various methods of cognitive enhancement, such as direct transcranial, magnetic, genetic and chemical stimulation of the brain.

“I’m especially interested in distributive justice. Consider people who don’t have access to the internet now – it’s increasingly difficult for them to participate in society. These cognitive enhancement technologies have the potential to increase that social divide. How do you regulate to prevent that?”

Hazem’s concern about research hype around ‘smart drugs’ – that is, drugs used to help those with ADHD and people without such conditions who take them to enhance their cognitive performance (thorough studies show they won’t), attracted the attention of leading US tertiary education publication, the Chronicle of Higher Education in its article on smart drug misuse.

Hazem’s journalism work in Epypt included writing for the science journal Nature in its Middle East portal dedicated to research in the region. Simultaneously, he completed a distance course Master of Sciences and Society via the Open University in Milton Keynes, England. He already had a Philosophy degree from University of Sydney, Australia.

“I planned to go to the UK for my PhD,” Hazem says. “I had a scholarship, but couldn’t get a visa. Then I came across Otago’s Bioethics Centre, looked at their international reputation, sent an email and got really encouraging feedback. International PhD students pay local fees here, too. Otago wouldn’t have been an option for me, otherwise.

“There’s some really good work going on at Otago. Socially it’s good, too. I’m on the Postgraduate Society committee.

“In fact,” he adds, getting up, “I’m off to a postgrad event, to play Laser Tag. I’m sure it will have some kind of therapeutic effect.”

Find out more about bioethics study at Otago