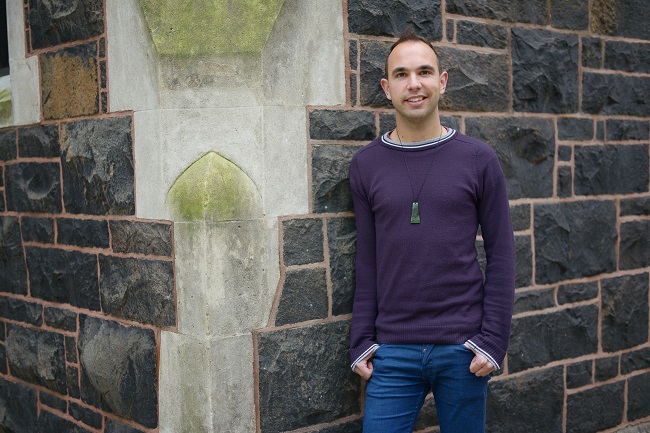 Wanting a change of scene after his University of Leicester Master of Geology course, Ben Moorhouse chose an Otago PhD and discovered volcanic oddities unlike any he’d encountered before.

“The project had lots of field work, was close to where I would live, and I was offered help on how to apply for a scholarship and visa. Otago’s International Admissions Co-ordinator, Lynda Lamb, was so helpful. James, who is one of my supervisors, met me as soon as I arrived in 2011 and set me up in my office. I settled in really quickly.

“We tramped the Cape Wanbrow coastline, doing stratigraphic logging of its volcanic structures. To investigate the cliffs, we used Otago’s research boat Polaris and took a speed boat off it to see up close, taking heap of photos which, when stitched together, told me more of the story. I analysed crystals from the area to determine eruption characteristics and used an element called strontium to date individual volcanoes.

“We found the site has monogenetic volcanoes. Usually, each monogenetic volcano erupts once and stops, then another will erupt once nearby, similar to Auckland. But in Oamaru these volcanoes formed in the same spot, six times, each behaving exactly the same each time, but separated by millions of years. It’s very unusual.”

Thesis done and passionate about getting science into the community, Ben is back in the UK teaching Geology for an Outreach company delivering summer schools to students aged eight to 18. Ben and a group of Otago Geology students set up their own Outreach programme in Dunedin that “skyrocketed” within schools and community groups.

“My whole Otago Geology experience has been really good fun,” he says.