Antibiotic failure in tuberculosis due to interactions with myeloperoxidase, an enzyme released by immune cells

A postgraduate research opportunity at the University of Otago.

Tuberculosis (TB) kills more humans worldwide than any other infectious disease. It is caused by infection with the bacterium Mycobacterium tuberculosis. Approximately 30% of the world’s population is infected with M. tuberculosis, the infection often remaining latent. In 2014 around ten million new cases of TB were diagnosed and there were 1.5 million deaths from the disease. Alarmingly, infections are becoming increasingly difficult to treat due to the emergence of antibiotic resistant strains of M. tuberculosis. Our goal is to tease out the interactions between immune cells and drugs against M. tuberculosis to better understand how to target this disease.

Isoniazid is one of the front line drugs used to fight TB in humans. It is a molecule that specifically cripples the mycobacterium, but when delivered to patients the drug is not always effective. It is critical that we fully understand the mechanism of action of isoniazid when it is surrounded by immune cells. Recently it was shown that neutrophils – the predominant innate immune cell in blood – play an important role in the clearance of M. tuberculosis from the lungs of infected individuals. This interests us as we study the neutrophil and how it kills disease-causing organisms. In our lab, we work with a non-pathogenic model of M. tuberculosis, a mycobacterium strain called M. smegmatis. 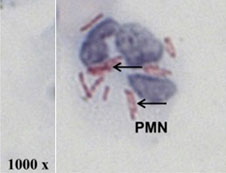 We know that neutrophils contain and release an enzyme called myeloperoxidase whose normal function is to produce bleach to kill bacteria. Previous work in our group shows that myeloperoxidase oxidises isoniazid, which could potentially inactivate the drug. We demonstrated that the oxidised form of isoniazid can covalently bind to amino acids, therefore potentially raising an immune response against the drug. On top of this, isoniazid prevents myeloperoxidase from producing bleach. These results suggest that when the drug isoniazid encounters myeloperoxidase in the body, the outcome will be detrimental to both the drug and the immune system’s abilities to kill mycobacteria.

We propose that interactions between isoniazid and myeloperoxidase will impair bacterial killing by neutrophils, limit the efficacy of the drug, and promote adverse drug reactions via formation of protein adducts. Understanding these interactions may lead to the development of more effective drugs to combat tuberculosis.

Neutrophils will be isolated from peripheral blood of healthy donors. For cell experiments we use M. smegmatis, a non-pathogenic species of mycobacteria. Conjugation of isoniazid to peptides and proteins will be determined using mass spectrometry techniques.

This project would suit an enthusiastic and curious student with a background in chemistry/biochemistry and/or microbiology.

This project is one of the many available for the 2018 intake of BBiomedSc(Hons) at the University of Otago, Christchurch campus.