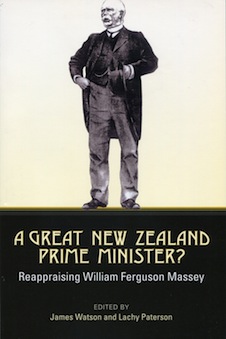 One of New Zealand’s longest-serving Prime Ministers, his political legacy has not always been treated kindly. However, recent work by historians suggests that a reappraisal of Bill Massey – which this book provides – is overdue.

It is clear, a century later, that Massey was Prime Minister at a particularly turbulent time in its history. The opening essay by Erik Olssen reviews the development of his own assessment of Massey over almost five decades. After initially imbibing the established Labour Party view of the man as thoroughly reactionary and anti-democratic, he recounts his growing awareness that there was much about Massey’s personality and career that contradicted that portrayal. The following chapters examine aspects of Massey’s life and leadership in chronological order – from his experience as a teenage immigrant from Ulster through to his part in the Versailles Peace Conference and the tough campaign in 1923, less than two years before his death, for Imperial Preference, which secured the market for New Zealand products in Britain for the next half century.

JAMES WATSON is senior lecturer in history at Massey University, Palmerston North. He has particular interests in the interaction between technological change and economic, social and political developments, the relationship between New Zealand and the United Kingdom in the twentieth century, and the history of fascism, principally in Europe. He is the author of Makers of the Modern World: W.F. Massey (Haus Publications, 2010).

LACHY PATERSON is a lecturer at Te Tumu School of Maori, Pacific and Indigenous Studies, University of Otago. He is the author of Colonial Discourses: Niupepa Maori 1855–1863 (Otago University Press, 2006) and is currently researching the women workers of the Presbyterian Maori Mission.