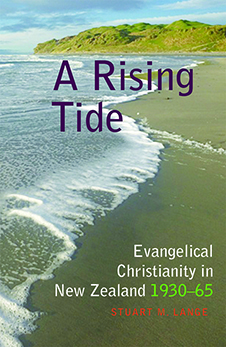 In New Zealand, evangelical Christianity has always played a significant role. This book explores the fascinating story of the resurgence of evangelical Protestantism in the 1950s and 60s, and its pre-war origins.

The story focuses especially on evangelicals in the mainstream churches, in the universities, and in evangelical organisations. It is about the leading personalities, and the ideas that moved them, during a period when a moderate British-style evangelicalism was paramount.

The story of evangelical Protestantism has been extensively written about by historians in Britain and the US. This important book helps tell the New Zealand part of that story.

'A sustained investigation of a major development in New Zealand church history … central to an understanding of the New Zealand religious experience.'
– Professor David Bebbington, University of Stirling, Scotland

STUART LANGE teaches history as a senior lecturer in the School of Theology, Ministry and Mission at Laidlaw College in Auckland. His PhD is from the University of Otago.