Critical essays on the work of Lloyd Geering 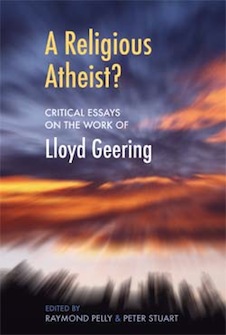 During his lifetime, internationally celebrated New Zealand thinker and author Lloyd Geering has published numerous thought-provoking books on the nature of religious belief - and has also been tried for heresy (in 1967). This book critiques Geering's now well-known religious atheism in terms of its philosophical underpinnings.

The authors look at the justifications of 'Geeringism', in particular his rejection of the cognitive content (and other aspects) of Christian belief, and illuminate not only the specifics of his approach to the age-old question 'How are we to live?', but also the wider set of ideas from which such issues have arisen.

RAYMOND PELLY (MA, DTheol) is Priest Associate at the Anglican Cathedral in Wellington. He has taught at St John's College Auckland, the University of Massachusetts, and Westcott House, Cambridge. Recent publications include Auschwitz-Resurrection (2000), and Anchorhold: The Prayer of the Heart in Daily Life (2005). He is writing a book, Pilgrim to Unholy Places, which explores what meaning we can give to the 'sacred' in a radically de-sacralised world.

PETER STUART (MA, NZ & Oxon) is an Anglican priest in the Diocese of Wellington, where he was Canon Theologian and Director of the Wellington Institute of Theology until recently. A historian and theologian, his interests include the theological education of lay and ordained people for ministry; and the relationship between Christianity and society, politics and higher education in New Zealand. He is also secretary to the Wellington Theological Consortium.