A Theatre in the House 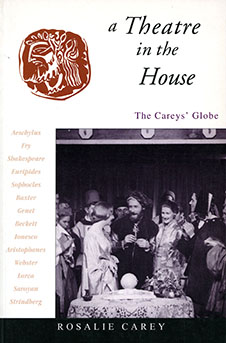 For most of the 1960s, Dunedin's Globe Theatre was the most important thing happening in serious New Zealand theatre. It was a private theatre, producing major plays that were making new in Europe – Waiting for Godot, Who's Afraid of Virginia Woolf?, Marat/Sade – and encouraging the writing of New Zealand works, including most of James K. Baxter's plays. The Globe was truly a 'theatre in the house', as it was part of the Careys' home. As well as in the theatre, drama classes took place in the main bedroom, wardrobe work in the breakfast room, and family life continued in the midst of it all. Rosalie and Patric Carey founded the Globe in 1961 and over the years hundreds of people were involved in its productions, many of whom are now prominent in the arts and broadcasting. The Globe continues as an independent theatre, running drama classes and regular productions. In this book, Rosalie Carey tells the story of the theatre in its Carey years.

ROSALIE CAREY is a well-known actor, producer, playright and writer. Her children's stories have also been broadcast and published.