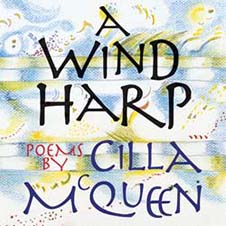 When leading New Zealand poet Cilla McQueen reads her work audiences are captivated not only by her accessible and wide ranging poems, but also by the drama and musicality of her performance.

This strong performance is encapsulated in a new sound recording. A Wind Harp features the voice and lyrics of Cilla McQueen, supported by original music from Dunedin musicians, The Blue Neutrinos.

A Wind Harp brings together work from 20 years of performance and publication, with poems selected from three of McQueen’s books: Axis (2001), Markings (2000), and Soundings (2002).

Designed as a companion to Fire-Penny, a collection of McQueen poems published in 2005.

CILLA McQUEEN lives in Bluff, in New Zealand's far south, and is an award-winning poet. Fire-Penny was her tenth book of poetry. A Wind Harp is her first CD. Her publications include The Radio Room (Otago University Press, 2010) and the handprinted letterpress limited edition An Island (Mirrorcity Press, 2014), and most recently Edwin's Egg and other poetic novellas (Otago University Press, 2015). She has been awarded the NZ Book Award for Poetry three times and held numerous fellowships including the QEII Arts Council's Scholarship in Letters, the University of Otago's Burns Fellowship, a Fulbright Visiting Writers' Fellowship to Stanford University and a Goethe Institut Scholarship to Berlin. She was awarded an honorary doctorate in literature by the University of Otago in 2009. In 2010 she received a Prime Minister's Awards for Literary Achievement (Poetry).