A history of the vote in New Zealand 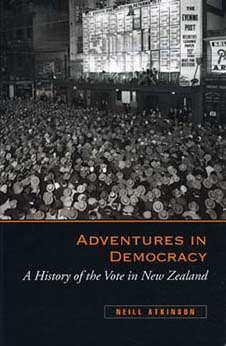 Neill Atkinson traces the evolution of our distinctive democracy since the beginning of representative government in the 1850s. The history of the vote in New Zealand is fascinating, demonstrating our sheer determination in wanting to govern ourselves by taking responsibility for our own affairs, while developing our identity as a nation.

Adventures In Democracy traces the evolution of today's voting system – from the first election in 1853, the creation of Maori seats in 1867, the world-leading women's suffrage legislation of 1893, and the dramatic transition to proportional representation in the 1990s. Well-illustrated throughout, the book shows how New Zealand's democratic innovations have been shaped by pragmatism, principles and personalities. It also looks at how elections were organised, how candidates and political parties ran their campaigns, and how the new media of radio and television have changed elections forever.

Adventures In Democracy is published by the University of Otago Press in association with the Electoral Commission, with assistance from the Ministry for Culture and Heritage. The project is also supported by the Electoral Enrolment Centre, Te Puni Kokiri/Ministry of Maori Development, and the Ministry of Justice.

NEILL ATKINSON is a professional historian with a particular interest in political, labour and maritime history. He currently works with the History Group of the Ministry for Culture and Heritage in Wellington. He is the author of Rewarding Service: A History of the Government Superannuation Fund, and Crew Culture: New Zealand Seafarers under Sail and Steam. He has also written several essays for the Dictionary of New Zealand Biography series.