A memoir of mountaineering in New Zealand
and the Himalayas 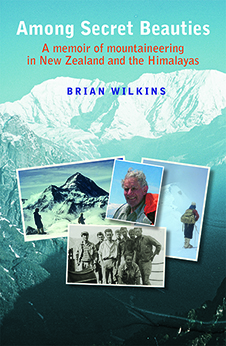 Climbing entered the world stage in the 1950s: this was the era that produced not only Sir Edmund Hillary but a strong body of world-class New Zealand climbers. In this important and dramatic book Brian Wilkins, who was part of the adventure, shares his experiences of climbing in the Southern Alps and the Himalayas.
During the New Zealand Alpine Club expedition to the Himalayas in 1954, the year after Everest, Wilkins was the climber most closely associated with Hillary. Hillary’s two narrow escapes from death during the expedition saw Wilkins in a unique position to gauge the character and actions of this legendary figure at a formative stage in the famous climber’s career.

Wilkins’ New Zealand climbing includes the first ascent of the northeast ridge of Mt Aspiring, a gripping drama of survival and human endurance and a test of the ethics of mountaineering.

In this account he also submits the writings of his contemporaries to robust critical attention, writing with warm gentle humour, honesty and insight.

BRIAN WILKINS retired in 1988 from a career lecturing in pharmaceutical chemistry. He has been a keen tramper and climber all his life. Brian is the father of Damien Wilkins, Director of the International Institute of Modern Letters at Victoria University of Wellington.