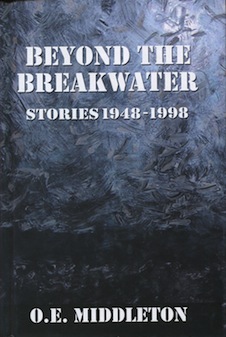 Beyond the Breakwater brings together 26 outstanding short stories spanning half a century by an acclaimed master of the genre, O.E. Middleton. While Middleton has been linked with the masculine realist New Zealand tradition of Frank Sargeson and Roderick Finlayson, Beyond the Breakwater also contains a diverse range of international settings and characters, from Berthe Albrecht’s postwar experiences of Paris in ‘For Once in Your Life’ to the secular London Eucharist of ‘The Doss-house and the Duchess’. At his best, Middleton’s attention to detail and fully realised context brings to mind earlier masters such as Yukio Mishima and Guy de Maupassant; in a typical Middleton story, carefully observed detail builds an impressionistic platform on which the destinies of his characters unravel.

‘O.E. Middleton is a fine writer ... he’s the only New Zealand writer who has made me weep over a story.’ — Janet Frame

O.E. MIDDLETON is a senior figure in New Zealand literature. Having worked at a variety of jobs, he served in the air force and army in 1944–45 and after the war lived in the US before travel in Europe. He began publishing his stories in 1949 and emerged as a significant practitioner of the ‘vernacular critical realist tradition of Frank Sargeson’. But, as the editor has written, ‘At his best ... he is a subtle artist who can extend the sympathetic imagination of his readers, increase their awareness of basic human worth and show the evils of racial and economic injustice.’

LAWRENCE JONES is a leading historian of New Zealand fiction. Born and educated in California, he moved to a lectureship in English at the University of Otago, where he initiated the first undergraduate paper in New Zealand literature. Books published by Professor Jones include Picking up the Traces: The Making of a New Zealand Literary Culture 1932–1945 (2003).