Captivity, cannibalism and colonialism in the Pacific 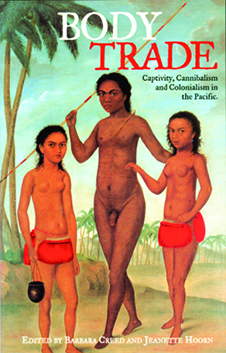 A compelling collection of essays on the ‘traffic’ in human bodies in the Pacific from the eighteenth century until today. International scholars examine the ‘captive body’ as it is represented in a range of media from Captain Cook’s journals and Melville’s novels to popular culture and film, including Jedda, Meet Me In St Louis and The Murmuring. This book revisits Europe’s colonial project in the Pacific, exposing the myths surrounding the trade in heads, cannibalism, captive white women, the display of indigenous people in fairs and circuses, Australia’s stolen generations, the ‘comfort’ women and the making of the exotice/erotic body.

BARBARA CREED is the author of the acclaimed book The Monstrous Feminine: Film, Feminism, Psychoanalysis (Routledge) and has written on film and popular culture for a range of international journals and anthologies. She is Professor, Screen Studies, and Head of the School of Culture and Communication, University of Melbourne.

JEANETTE HORNE is Associate Professor of Visual Cultures, School of Culture and Communication, University of Melbourne. Her latest book is Australian Pastoral: The Making of a White Landscape (2007).