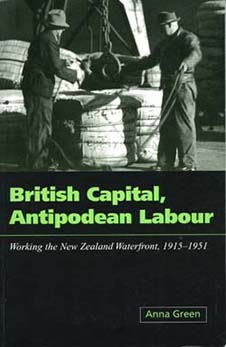 This book looks at the history of the New Zealand waterfront from early in the twentieth century, and challenges widely-held views.

This area of dispute has widely been seen as a conflict between the government and a stubborn union, with the employers and the role they played all but absent. Says Dr Green, 'One of the original aspects of this book is the inclusion of the missing element in all previous state and union-centred accounts of waterfront relations: the employers.' The author draws on her research about the shipping companies, closely scrutinising their financial power, their political influence in New Zealand, and their methods of labour control.

British Capital, Antipodean Labour is the first book to look at the processes of work on the waterfront. The author focuses on three ports: Auckland, Wellington and Lyttelton, revealing how the work of loading and unloading ships was done, and the conditions in which the 'wharfies' worked. These include pay, hours, and the dangerous and unpleasant nature of much of the work.

According to Dr Green, 'Understanding the waterfront working conditions of the past may be of considerable relevance to the present. The trend of the last decade towards temporary contracts, casual and part-time labour reflects aspects of the pre-war working experience on the waterfront. My argument represents a major challenge to widespread public myths about the New Zealand waterfront workers, and revises previously published interpretations of waterfront conflict which focus almost exclusively upon the institutional and political context. Understanding the causes of the 1951 conflict also sheds new light upon New Zealand's complex relationship with Britain during the middle decades of last century.'

The incorporation of oral histories from both former employers and waterside workers has provided a much deeper understanding of the meaning of work in an insecure environment. The lives of workers and the strength of the union are well illustrated, as are also the views and actions of the employers.

A feature of British Capital, Antipodean Labour is the collection of thirty historical photographs showing work processes on the wharves. The text is enlivened with often humorous anecdotes, gleaned from the oral histories. The book will interest any serious reader of New Zealand history, as well as those working in management, business and industrial relations, as well as economists and historians.

Dr ANNA GREEN is a senior lecturer in the history department at the University of Waikato. She is author, with Kathleen Troup, of Houses of History (Manchester University Press and New York University Press), and numerous book chapters, articles, papers and reviews. British Capital, Antipodean Labour is based on her PhD thesis and adapted for a general audience.