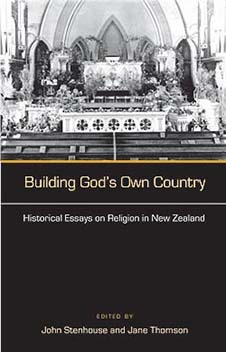 As the debate surrounding the Civil Unions Act illustrated, issues about marriage and sexuality have significant religious dimensions.

In Building God's Own Country: Historical Essays on Religions in New Zealand, editor John Stenhouse contends that many features of society and culture - family life, gender roles and relations, racial and ethnic identities and interactions, and weekly rhythms of work and leisure - cannot be understood without looking at New Zealanders' religious beliefs and values.

Although New Zealand historians have tended to pay little attention to the role of religions in this country's past, the essays in this collection show that religious beliefs have had an important historical influence on our society. Settlers in New Zealand did not leave their religious identities, beliefs and values behind. Religious movements and groups have always played a part in the social and political life of New Zealand, while many 'religious' issues have generated considerable discussion both within and outside of the churches.

Much of the collection has an Otago/Southland framework that offers a perspective on religious experiences that is regional, but of national relevance. While some essays focus on mainstream churches, such as the Anglicans and Presbyterians, authors also look at Jews, 'heathen' Chinese, Mormons, Irish Catholics, the Salvation Army, missionaries and a high-profile Dunedin atheist.

Scottish Presbyterians gave Otago and Southland much of their distinctive culture and ethos, and it is argued that they built a more tolerant, humane, sociable, inclusive and bonded society than some historians have acknowledged. Essays on the Moray Place Congregational Church from 1862 to 1966 and the Jewish kehilah in nineteenth-century Dunedin show both groups plunging into Dunedin's relatively open and tolerant civil society. They made themselves 'insiders', winning economic success and social standing. In contrast, Dunedin's Roman Catholic minority were determined to retain a distinctive identity.

Building God's Own Country is the third volume from post-graduate students of the University of Otago History Department published by University of Otago Press. Previous volumes have been on Māori history and the history of mental health care. These collections aim to bring the best student research on an important historical theme to a broad audience of scholars and the interested public.

JOHN STENHOUSE is Associate Professor of History at the University of Otago.

The late JANE THOMSON worked as an independent editor and writer.