The Work of Government and Colonial Architects,
1860s to 1960s 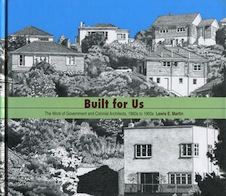 Part of our national character, many of these buildings were designed by six men who held the post of Colonial or Government Architect from the 1860s to 1960s. This book brings together all of their surviving public works, with drawings illustrating the distinctive style of design and particular brilliance of each.

The period takes the reader from colonialism to modernism. Buildings from all over the country are included. The author, a retired architect, depicts these in fine drawings that display the buildings' essential qualities. They appear as they were when first finished, but in a present-day context, so that we can appreciate the original design.

Lewis Martin has a passion for buildings. As an architect in private practice he worked on hospitals, as well as fire stations, post offices, libraries, school halls, local authority offices, office blocks and houses. He was chair of the New Zealand Institute of Architects Education Committee during the 1970s, when an attempt was made to introduce architecture in some form into school syllabuses. The committee believed that only a nation where consumers were interested in and knowledgeable about architecture could create a society where buildings were generally admired and pleasing.

The impetus for Built for Us grew from not only a personal admiration for the work of the architects, but a fear that it would be lost in and swallowed up by contemporary neo-modernism. 'I wanted to separate the work out and display it clearly,' Martin says.

LEWIS E. MARTIN is a retired architect living in Wellington. After retiring from architecture he became a professional actor, working in live theatre, radio, television and films.

'Lewis E. Martin's important representational survey of the nationwide work of the six men appointed to the task during this period is a sheer delight. Martin, himself a retired architect, has chosen to let each building speak for itself by anchoring minimal text around deliciously descriptive, yet simple, line drawings ... Combining the history of architecture with biography, this is a sterling work.' – Andrea Little, New Zealand Home & Entertaining

'Built for Us is also in its low-key way something of a master work: authoritative, opinionated, personal ...' – Douglas Lloyd-Jenkins, NZ Listener