Butterflies of the South Pacific 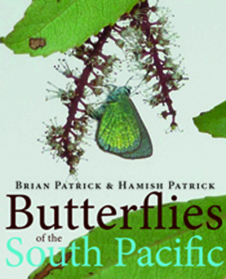 The South Pacific is a vast expanse of ocean – over 50 million km² – with tiny scattered islands and island groups. From Kiribati, Tuvalu and Fiji in the west, to the far-flung Marquesas and Austral Islands in French Polynesia in the east, this book surveys (and discovers) the butterfly inhabitants of these tropical islands. For completeness, Hawai’i to the north – where there are many fewer islands in an otherwise empty ocean – is included. To the south and with a much larger land area, lies temperate New Zealand, with a further string of islands reaching into subantarctic waters.

It is easy to misjudge butterflies as fragile flying insects: their distribution across a wild and expansive Pacific Ocean proves otherwise. Long ago they colonised by flight isolated and tiny atolls and they continue to claim new territory. Others came by land bridges when sea levels were lower, to mark out their distribution and perhaps establish new species. More recently, people have made their way into the South Pacific region; the final chapter considers the impacts of human migration and population growth, and identifies conservation issues.

BRIAN PATRICK is the co-author of several books on natural history and invertebrates, including Wild Dunedin, Wild Central, Wild Fiordland (with Neville Peat) and Butterflies and Moths of New Zealand (with Brian Parkinson). He has worked for the Department of Conservation, at the Otago Museum and as director of the Alexandra Museum.

HAMISH PATRICK could not escape butterflies and moths, as Brian’s son, and has assisted in the fieldwork for and writing of this book. He has completed his honours at Lincoln University and is working towards his PhD in 2013.