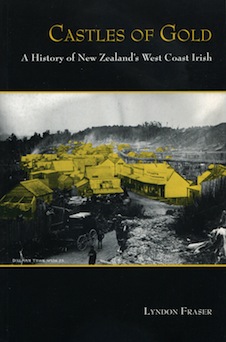 From the 1860s, the West Coast of New Zealand’s South Island was the scene of two major goldfields, attracting hopefuls from all over the world. Suddenly, where there had been native bush and wide rivers, towns with 400 pubs and accommodation houses had appeared. Amongst the hopefuls were Irish miners, many of whom stayed on after the goldrushes as part of a community with its own distinctive character.

This is the first study on the history of those Irish – where they came from, who they were, how many women came and what they did, how people sustained their family connections, what they believed – in the context of the history of the larger Irish diaspora. The author draws on private letters and oral histories as well as more conventional sources, and includes many individual migration and settlement stories.

LYNDON FRASER is a Senior Lecturer in the School of Sociology and Anthropology at the University of Canterbury. His previous publications include To Tara via Holyhead: Irish Catholic Immigrants in Nineteenth-Century Christchurch (which won the Sir Keith Sinclair History Prize), A Distant Shore: Irish Migration and New Zealand Settlement (as editor) and Shifting Centres: Women and Migration in New Zealand History (co-edited with Katie Pickles). His most recent book (co-edited with Angela McCarthy) is Far from 'Home': The English in New Zealand (Otago University Press, 2012).