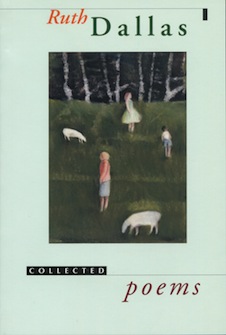 To Ruth Dallas, words are as much a part of the natural world as are beech trees, seashells and mountains. It is no accident, therefore, that much of her work should be rooted in the New Zealand landscape, reflecting its rhythms, seasons, its benevolence and its harshness, and its effect on men and women.

But her interests ranged beyond the land and the history of its settlement, as much of her work was influenced by her response to Chinese poetry and thought. Always, though, there has been an emphasis on the musical qualities of poetry: this aspect, more than any other, established Ruth Dallas as one of New Zealand's most distinguished and best-loved poets.

RUTH DALLAS was born in Invercargill in 1919, and first published her poems in the Southland Times in 1946. She was the author of several books of poetry and also of novels for children. She received a number of literary awards, including the New Zealand Book Award for Poetry in 1977 for her fifth collection, Walking on the Snow. Her Collected Poems was published in 1987. She held the Burns Fellowship at the University of Otago and was made an honorary Doctor of Literature of the same university.