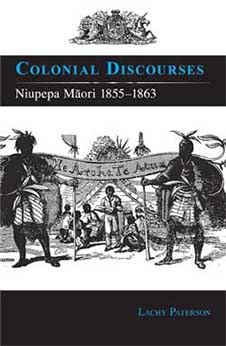 In 1855, most Māori lived in a tribal setting, as they expected, exercising the chiefly rights guaranteed by the Treaty of Waitangi. But their world was changing. Many Māori had entered the market economy, most had converted to Christianity, many could read and write, some had sold land to the government. These trends pleased the government, which envisaged a New Zealand dominated by Europeans, with the benefits of European civilisation being extended to Māori, elevating them socially and economically. Ultimately the two races would become he iwi kotahi – one people.

The government used its own newspaper, Te Karere Māori, to disseminate this message to Māori. Other newspapers were published by government agents, evangelical Pakeha, the Wesleyan Church and the rival Māori government, the Kingitanga. But while the newspapers were used for propaganda, they provided a forum, with many Māori debating the issues of the day. As a result, this book is able to illuminate the whole colonial discourse between Māori and Pakeha as it appeared in the Māori-language newspapers.

LACHY PATERSON is a Senior Lecturer at Te Tumu: School of Māori, Pacific and Indigenous Studies, and a member of the Centre for Research on Colonial Culture at the University of Otago. His research interests focus on post-contact Māori history, especially print and textual culture and particularly through the use of Māori-language sources. His most recent publication (co-edited with Annabel Cooper and Angela Wanhalla) is The Lives of Colonial Objects (Otago University Press, 2015).