New Zealanders and their pets 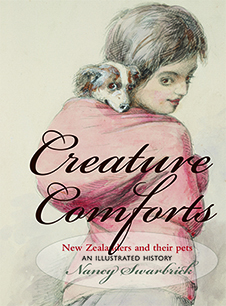 New Zealand has one of the highest rates of pet ownership in the world – in 2011, 68 per cent of all Kiwi households had at least one pet: almost half had a cat and nearly a third had a dog. Yet until now no book has explored how pets came to be such an integral part of the New Zealand way of life.

Creature Comforts does just this. By chronicling the major events and ideas that have shaped pet keeping in New Zealand, this fascinating and entertaining book explains the strong relationship we have with our animal friends, and how this has changed over time. It looks at the social impact of fanciers' organisations, the moral influence of the SPCA and other animal welfare groups, the educational role of calf clubs, and the questions raised by animal rights activists. Along the way, it tells the stories of some memorable companion animals.

The book is beautifully illustrated and includes many previously unpublished historical images.

NANCY SWARBRICK is a Wellington historian who has spent most of her career working on major reference projects, notably The Dictionary of New Zealand Biography and Te Ara: the Encyclopedia of New Zealand. Creature Comforts was inspired by her interest in social and cultural aspects of New Zealand's past, particularly changing attitudes towards animals. Like many people, she grew up in a household with pets, and now enjoys the company of a feisty black cat called Guido.