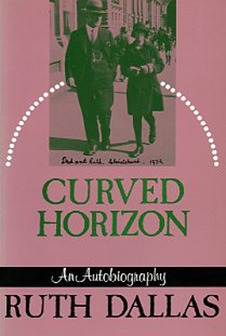 'My parents would have liked a boy, but were content to have another girl. As it turned out, the boys in my age group were to fight in the Second World War, so I might not have survived to write this.'

At a time when Brasch, Fairburn, Glover and others spoke bitterly of the lack of support given to New Zealand artists, how did a single woman from Southland live and work as a writer, establishing herself as a poet and author of international regard? In Curved Horizon, Dallas recounts her remarkable life with the insight and assurance we expect from this most accomplished poet.

Poet and children's author RUTH DALLAS published more than 20 books in her lifetime. She was the winner of several major literary awards and received a CBE in 1989. She passed away in March 2008.

'[She writes] with images so fresh that the lens is cleared and we see her subject for the first time.' (Fiona Farrell, NZ Listener, 11 July 1987)