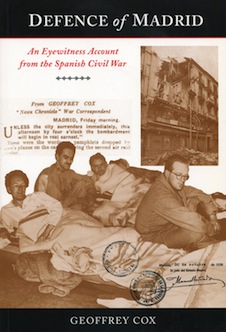 Goodies and baddies take some sorting out in this tale of the siege of Madrid by Franco's right-wing forces supported by the Nazis and the fascist regime of Mussolini (the 'rebels'), against the civilian population and its government representatives, just elected, who happened to be left-wing. Once sorted, Cox's account of the city under attack, in one of the twentieth century's first urban wars, has all too many echoes today. This new edition, with an introduction and selection of historical photographs, as well as samples of Cox's journalism from the front, will confirm its position as one of the classics of twentieth-century reportage. It is being published for the 70th anniversary of the event.

'A penetrating understanding of people ... a remarkable and gifted New Zealander ... a fine precursor of what [work] was to come.' – NZ Books

GEOFFREY COX is a New Zealand Rhodes Scholar who chose to be a journalist rather than an academic. He made the decision in the mid-1930s, and soon became a foreign correspondent reporting from Berlin on the establishment of the Nazi regime, which he recalled in his book Eyewitness: A Memoir of Europe in the 1930s. Spain followed. After World War II, he went on to found Independent Television's News at Ten. He now lives in Surrey in England.