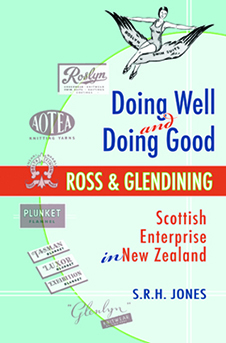 During the eighteenth and nineteenth centuries large numbers of Scots emigrated to seek their fortunes abroad. Better educated than the English and with a strong Presbyterian ethic, they were unusually successful in business and politics. This was true for New Zealand as elsewhere.

Ross & Glendining Ltd was founded in Dunedin in 1862, during the gold rush, by two contrasting characters: Caithness-born John Ross and Robert Glendining, from Dumfries. Initially a drapery importing business, it opened branches throughout New Zealand and warehouses in all the main centres. Careful management and efficient systems enabled the business to grow, despite strong competition from Australia. After the investment boom of the seventies, R&G began to diversify, investing in sheep runs, a woollen mill, other manufacturing and even a coal mine. This history offers not only a portrait of a firm but a window on the development of the New Zealand economy and the emergence of a manufacturing sector.

'Doing Well and Doing Good will be an important and very readable university text, but it is deserving of a wider readership.' – Otago Daily Times, Sat 27 March 2010.

STEPHEN JONES is an honorary research fellow in the Department of Economic Studies, University of Dundee. He has previously taught at universities in England, Australia, New Zealand and the US. He graduated from the London School of Economics after a career in the merchant navy and completed his PhD at London University. His research is mainly concerned with the development of firms and markets.