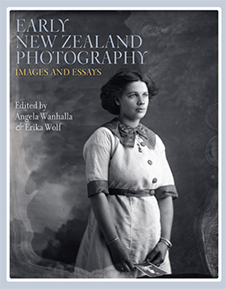 We are all participants in an increasingly visual culture, yet we rarely give thought to the ways that photographs shape our experience and understanding of the world and historical past. This book looks at a range of New Zealand photographs up to 1918 and analyses them as photo-objects, considering how they were made, who made them, what they show and how our understanding of them can vary or change over time. This emphasis on the materiality of the photograph is a new direction in scholarship on colonial photographs.

The writers include photographers, museum curators, academics and other researchers. Their essays are not intended as definitive readings but rather offer a variety of ways in which to read the images they have chosen. In the course of the book, they explore a host of issues related to the development of photography in New Zealand. World War I is the end point, as it coincided with profound cultural shifts with the expansion of the mass illustrated press and the rise of consumer photography, as well as a change in New Zealand's place in the world.

ANGELA WANHALLA is a Professor in history at the University of Otago. She specialises in the histories of cultural encounter in New Zealand's colonial past, focusing on gender, race and colonialism in the nineteenth century, the indigenous history of the North American West, and the history of intimacy, particularly interracial relationships and hybridity. She is the author of In/visible sight: The mixed descent families of southern New Zealand (Wellington, 2009) and co-editor with Annabel Cooper and Lachy Paterson of The Lives of Colonial Objects (Otago University Press, 2015).

ERIKA WOLF lectures in art history and theory at the University of Otago. A graduate of Princeton and Michigan universities, her primary field of research is Soviet art and visual culture. She is the author of Koretsky: The Soviet photo poster, 1930–1984 (New York, 2012). She has recently extended her research to both historic and contemporary New Zealand photography.