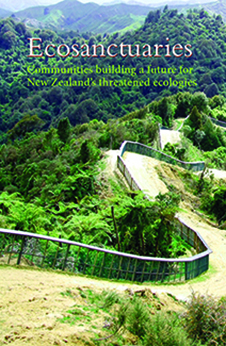 Over the past 10 years many communities around the country have launched ambitious projects to bring New Zealand’s native ecologies back to the mainland. By building predatorproof fences around big areas of land the aim is to protect native flora and fauna from introduced predators such as possums, mice, rats and stoats. These projects have faced a difficult balancing act as they try to build and sustain the social and economic support needed.

Diane Campbell-Hunt was two years into a study of the long-term sustainability of these ventures when she was tragically killed in a tramping accident in 2008. Her work had assembled the experience of a wide range of people involved with these projects – volunteers, DOC staff, trustees, iwi, employees, community leaders and project champions. After Diane’s death, her husband Colin took up the challenge to write up her research, and Ecosanctuaries is the result.

DIANE CAMPBELL-HUNT was a leading ecologist and botanist who was instrumental in the creation of the Orokonui Ecosanctuary in Dunedin. COLIN CAMPBELL-HUNT is a business school academic at the University of Otago.