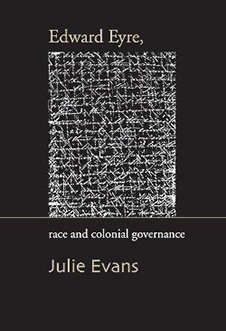 Edward Eyre, a mid nineteenth-century explorer, colonial administrator and later colonial governor, is remembered in Australia as the enlightened defender of Aboriginal rights. In New Zealand, it is simply recalled that he did not get on with Governor Grey. In England and the Caribbean, he is the reviled 'butcher of Jamaica'. In 1865, in response to an alleged rebellion in Morant Bay, he declared martial law. The result was over 600 'floggings', 1000 homes incinerated and 439 deaths.

This book explores Eyre's actions through his perceptions of the colonial encounter with local populations. It looks at the distinctive colonial cultures in which he lived – Australia, New Zealand and Jamaica – and the broader imperial obligations that framed his administrations. His interventions in Australia and Jamaica reflected a correlation between race, resistance and repression that characterised British colonialism. In New Zealand, where he was responsible for the development of administrative structures and the purchase of Māori lands for settlement, his term provides a case study of Britain's interest in establishing settler colonies.

JULIE EVANS lives in Melbourne with her husband and two sons. She has a Masters Degree in Women's Studies (La Trobe) and a PhD in History (University of Melbourne). She lectures in the Department of Criminology at the University of Melbourne where she co-ordinates the Honours programme and teaches Law, Race and Indigenous Peoples, a graduate course that examines the law's relation to Indigenous peoples in response to colonialism from 1492 to the present. Her current research theorises and demonstrates the intersections between international and domestic law in the formative stages of colonial rule when dispossession was paramount in Britain's settler colonies. Through development of 'The race and colonialism forum' she hopes to extend understandings of the historico-legal dimensions of current issues facing Indigenous peoples in settler states throughout the broader community.