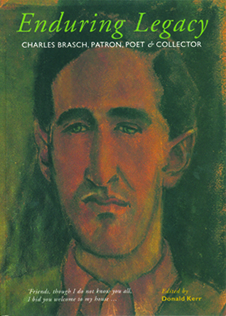 In the mid-twentieth century Charles Brasch was a major figure in New Zealand's cultural life – a poet, patron and founding editor of Landfall, the country's premier journal of letters and art.

Published to coincide with the release of his papers at the Hocken Library from a 30-year embargo, this volume celebrates his life and legacy in a series of essays by writers and critics, including people who knew him.

Brasch was an early collector of New Zealand modernists, including Colin McCahon, Toss Woollaston, Evelyn Page and many other important artists. This book is well illustrated with personal photographs and colour reproductions of works from that art collection, many of which have never before been published.

DONALD KERR is Special Collections Librarian at the University of Otago and co-Director of the University of Otago Centre for the Book, and has curated many exhibitions on Brasch. He is passionate about books and enjoys long-term projects in book history, especially the history of collecting and the formation of private libraries. He is the author of Amassing Treasures for All Times: Sir George Grey, Colonial Bookman and Collector (2006) and Hocken: Prince of collectors (2015) and has also written on the history of duelling: The Smell of Powder: A history of duelling in New Zealand (Random House, 2006). He has studied the collecting of Sir George Grey, Henry Shaw, Frank W. Reed and Esmond de Beer, and is currently working on a book about 12 prominent New Zealand book collectors.