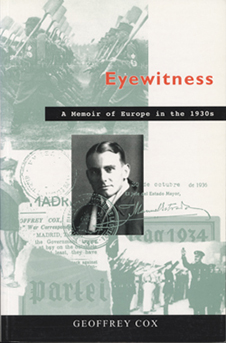 In 1932, Geoffrey Cox travelled to Britain to take up a Rhodes Scholarship. First as a student, then as a journalist, Cox became an eyewitness to events which have since become history: Hitler's rise to power in Germany, the Spanish Civil War, Stalin's brutal collectivisation of agriculture. Rich in detail, Cox's elegantly written prose offers a ringside seat to major twentieth-century events. This is a memorable memoir by one of the world's premier journalists.

As a Rhodes Scholar from New Zealand, Geoffrey Cox atypically chose a career in journalism. He soon became a foreign correspondent reporting from Berlin on the establishment of the Nazi regime, recalled in his book Eyewitness: A Memoir of Europe in the 1930s. He reported on many of the key European events leading up to World War II, but interrupted his career in journalism to serve in the North African and Mediterranean campaigns. He spent two years representing New Zealand in Washington and finished the war as General Freyberg's Chief Intelligence Officer. After the war he returned to news journalism in England, and was instrumental in pioneering television journalism in Britain. In 1956 he became the new Independent Television Network's first news editor and later co-founded World Wide Television, today a main television news agency. He was knighted for services to journalism. His extensive writings include Defence of Madrid, The Red Army Moves, The Road to Trieste, A Tale of Two Battles, Countdown to War, Pioneering TV News and Eyewitness.

'Geoffrey Cox strikes a rich vein of memory, but his book is more than a sober recording of notable events. The diet of information is enhanced by a sauce of personal observations ... His sharpness of eye, his grasp of detail and his fine flowing prose make this an outstanding recital of events.' – Gordon Parry, The Star