Charles Baeyertz and The Triad 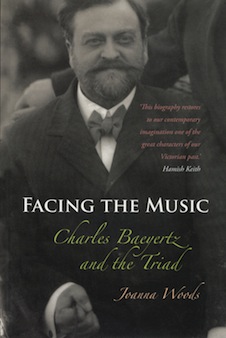 The Triad was founded in 1893 and ran into the late 1920s. For its first 22 years it was published in New Zealand, but in 1915 publication was transferred to Sydney where it was re-launched as an Australasian magazine. The magazine offered well-informed coverage of cultural activities in New Zealand, Australia and internationally in a broad mix of critical and original writing.

Notoriously outspoken, Baeyertz was feared and respected as a critic. His music criticism was particularly intelligent and rigorous, making no concessions to personality or amateur or professional status. His later co-editor, the self-styled ‘decadent’ Frank Morton, was equally candid.

This is an engaging biography of a fascinating man which also throws new light on a long-neglected period of New Zealand’s cultural past.

JOANNA WOODS has a PhD from Moscow State University and is the author of Katerina: The Russian World of Katherine Mansfield (Penguin 2001) and Diplomatic Ladies: New Zealand's Unsung Envoys (Otago University Press, 2013). In 2005 she was the National Library Fellow, when most of the research for this book was done. She lives in Wellington.

‘Her book is well-written, informative, entertaining and rich in quotation. It is also meticulously researched and annotated, abundantly illustrated, and has an excellent index.’ – NZ Books, Summer 2008

'Joanna Woods' biography of this complex, driven man is immensely readable ... Facing the Music is an exciting, elegant book of reference, excellently annotated, indexed and illustrated, which must be kept permanently on the bookshelf.' – Wairarapa Times, June 14 2008

'It's the first book-length study of Baeyertz ... It's long overdue and offers an interesting insight into several times and places.' Otago Daily Times, 16 June 2008

'As the subtitle indicates, Joanna Woods in Facing the Music attempted to "tell the story of the Triad through the biography of its creator". That story, she hoped, would "banish the myth that New Zealand had no viable cultural life before the 1930s". These aims are well achieved in this fully-researched and extremely readable book ... this fine exercise of historical scholarship and the historical imagination tells us much about a neglected period in New Zealand culture.' – Otago Daily Times, 21 June 2008

'A thoroughly enjoyable biography – Facing the Music is an engaging portrait of European New Zealand in the late 1800s into the twentieth century. This era has often been shunned by literary types, but Facing the Music goes where others haven't. Dr Woods doesn't miss a step. There's a delightful frothiness in her style overlying a rich scholarship.' – Scoop.co.nz, May 25 2008