The English in New Zealand 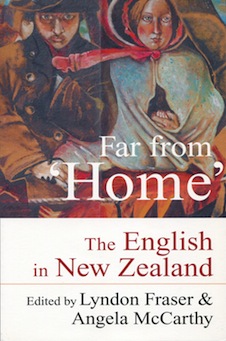 For almost 200 years, the English have been one of the largest migrant streams to New Zealand (they have been on the move globally since around 1600). Yet relatively little has been written about their experiences in New Zealand, compared with their Irish, Scottish, Indian, Chinese and Pacific counterparts. This book brings together leading international scholars and prominent local researchers to explore a wide range of topics and issues at the very heart of research into human mobility. Why did English-born people decide to emigrate? What factors shaped their migration and adaptation? How might we best describe and explain their experiences? This collection of essays will interest anyone interested in migration and/or family history.

LYNDON FRASER teaches in the Department of History at the University of Canterbury. He is the author or editor of several books on migration history, including Castles of Gold: A History of New Zealand's West Coast Irish (2007). In 2011, he was historian for One Land, an award-winning six-part series that sets three families in 1850s New Zealand.

ANGELA McCARTHY is Professor of Scottish and Irish History and Associate Director of the Centre for Irish and Scottish Studies at the University of Otago, where she teaches. She is the author of Scottishness and Irishness in New Zealand since 1840 (2011) and co-editor (with Catharine Colebourne) of Migration, Ethnicity, and Mental Health: International Perspectives, 1840–2010 (2012). Her most recent book is Migration, Ethnicity, and Madness: New Zealand, 1860–1910.