The Nude and Life Modelling in New Zealand Art 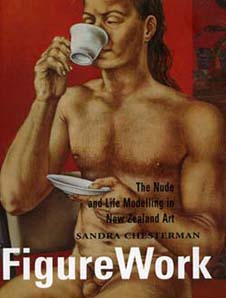 Although landscape has dominated New Zealand art, the human form has also been a focus for many artists.

The first to take this fresh approach to New Zealand art, FigureWork provides absorbing insights into the wide range of artists who have worked with the nude, the models who posed for them, and the controversies they may have encountered along the way.

Views on nakedness and the nude have changed dramatically during the past two hundred years. Chesterman traces the tradition of life drawing from its classical roots through to the twenty-first century resurgence in life drawing classes. Victorian sensibilities imposed restrictions on its use, while European artists visiting New Zealand in the early twentieth century brought more relaxed attitudes.

With the growth in conceptualism and abstraction in the 1950s, rebellion against tradition in the 1960s and the rise of feminist consciousness, the use of the life model was often viewed as anachronistic. Where once those who worked with the figure were derided for their impropriety, they were now criticised for their conservatism.

The model has usually been an anonymous partner. Historically, many have been reluctant to be identified because of the stigmatism attached to the role; if the art was considered indecent so too were the models who posed. Accordingly, there was often a concern about being recognised, and some images were not displayed in public until after the death of the model. In recent years there has been an increasing awareness of the rights of the model and draft3employment conditions have been introduced.

FigureWork is illustrated with 100 contemporary and historical artworks. The principal focus is on painting and drawing, but photography and sculpture are also discussed.

SANDRA CHESTERMAN is an independent art researcher and writer living in Auckland.