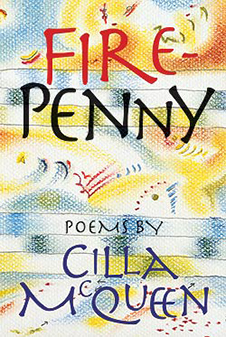 Snapshot reconstructions of life on Scotland's remote St Kilda island – ancestral home of the McQueens – open this tenth collection of poetry from Cilla McQueen. The spare life in this place of birds and sea and weather leads into a new set of poems from the poet's Bluff home, quiet observations on friends and animals, memories and dreams, and weather. Many of the reflective poems are conversational in style; one poem is written in the form of a play, and another appears at first to be a dictionary definition. Even the simplest of topics, such as eating cake or meeting a newborn baby, are taken by McQueen and transformed into thoughtful works.

The collection closes with a section entitled A Widow's Songs, in which the poet mourns her late partner.

McQueen's 2006 CD A Wind Harp was designed as a companion to Fire-Penny.

CILLA McQUEEN lives in Bluff, in New Zealand's far south, and is an award-winning poet. Fire-Penny is her tenth book of poetry. Her publications include The Radio Room (Otago University Press, 2010) and the handprinted letterpress limited edition An Island (Mirrorcity Press, 2014), and most recently Edwin's Egg and other poetic novellas (Otago University Press, 2015). She has been awarded the NZ Book Award for Poetry three times and held numerous fellowships including the QEII Arts Council's Scholarship in Letters, the University of Otago's Burns Fellowship, a Fulbright Visiting Writers' Fellowship to Stanford University and a Goethe Institut Scholarship to Berlin. She was awarded an honorary doctorate in literature by the University of Otago in 2009. In 2010 she received a Prime Minister's Awards for Literary Achievement (Poetry).