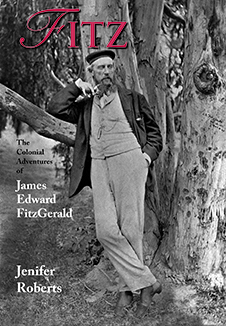 The story of James Edward FitzGerald, whose energy and enthusiasm contributed so much to the early history of Christchurch. Orator, writer, politician and journalist, he was the first Canterbury Pilgrim to set foot in New Zealand, first superintendent of the province of Canterbury, first leader of the general government, and founder of the Press newspaper.
From his early years in the Anglo-Irish gentry of England to his old age as auditor-general of the colony, Fitz is a gripping biography that reads like a novel, breathing new life into the extraordinary man who played a major role in public life through fifty years of New Zealand history.

Praise for The Madness of Queen Maria: The remarkable life of Maria I of Portugal and Glass: The strange history of the Lyne Stephens fortune, also by Jenifer Roberts:

‘A fascinating study of the power of money in 19th-century society.’ – Julian Fellowes, Sunday Times, London

‘A story containing so much drama, written with great flair and insight.’ – Cornish Times

‘Amazing, captivating, enthralling … a must-read for anyone interested in social history.’ – Portugal News

JENIFER ROBERTS is an English historian and direct descendant of FitzGerald. With access to sources previously inaccessible to researchers, she provides new information about one of our most outstanding colonists and his equally talented wife. Together, they personified the pioneer spirit of 19th-century New Zealand, a spirit reinvoked today as the people of Christchurch rebuild their city.