From Kai to Kiwi Kitchen 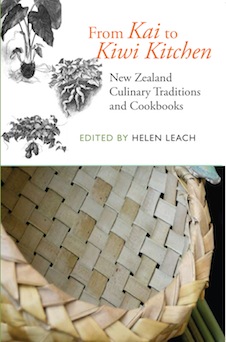 In the past two decades, cuisine and culinary history have attracted increasing attention, with both popular and academic books reflecting the growth of interest. Recipes are both sensitive markers of the socioeconomic conditions of their times and written representations of a culture's culinary repertoire yet, despite the vast number of cookbooks that survive, they have not been the primary focus of research projects. Acknowledgement of their potential contribution to our understanding of culinary history has been slow. This book is a first in its field.

The book opens with the three Macmillan Brown Lectures given by Helen Leach at Canterbury University in 2008 and broadcast on National Radio in 2009. The second part is comprised of essays by a number of contributors from a major research project that looked at Kiwi cookbooks, supported by the Marsden Fund.

The essays explore several themes in New Zealand's food history, including the adaptation of British and Maori culinary traditions in the nineteenth century and the fate of the Maori tradition in the twentieth, external influences on New Zealand cookery (previously thought to be predominantly British until after World War II), the transmission of cookery knowledge between and within generations, the impact of changing technology on cooking methods and recipes, nutritional advice in community cookbooks, and the transition from modernism to postmodernism, as seen in the cookbooks of Aunt Daisy and Lois Daish. This book will entertain anyone interested in food, New Zealand history or domestic culture.