The Darker Side of Kiwi Culture 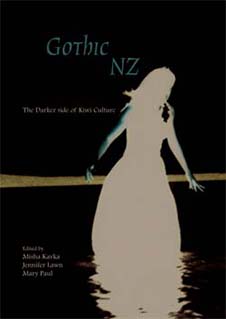 Contemporary creative writers, intellectuals, photographers, painters and other artists have all contributed to this volume exploring the idea of 'gothic' in New Zealand culture. From Martin Edmond's abandoned houses, to Ian Lochhead's Victorian corrugated iron structures, to Otis Frizzell's tattoos, from Peter Jackson's movie-making to ghost paintings – there's plenty of it. As the editors suggest, gothic is 'endemic to New Zealand's self-representation'.

The book grew out of the editors' teaching and research following an ‘Antipodean Gothic’ conference at Massey University, Albany, in 2002. They have extended their interests beyond the literary or strictly academic, taking in NZ culture in a broad sense.

JENNIFER LAWN is a senior lecturer in the School of English and Media Studies at Massey University's Auckland campus. Her teaching and research interests encompass the postcolonial Gothic, contemporary cultural studies in Aotearoa New Zealand, and representations of trauma in literature and film. Her most recent articles include studies on postcolonial apologies, the public administration of creativity, the impact of neoliberalism in Maori fiction, storytelling in Lloyd Jones's novel Mister Pip, and Janet Frame's fictional appropriations of Freud.

MARY PAUL is a senior lecturer in the School of English and Media Studies at Massey University's Auckland campus. She is the author of Her Side of the Story: Readings of Mander, Mansfield & Hyde, the editor of Lighted Windows: Critical essays on Robin Hyde and co-editor of The New Poets: Initiatives in New Zealand Poetry and New Women's Fiction. Her most recent book is Your Unselfish Kindness: Robin Hyde's autobiographical writings (Otago University Press, 2012).

'You don't have to wear black mittens and a cloak to read it. This is a genuine effort to explore the darker, uneasy side of our culture as it appears in not only writing, but also painting, photography and especially architecture.' – Wairarapa Times–Age