The Art of John Pule 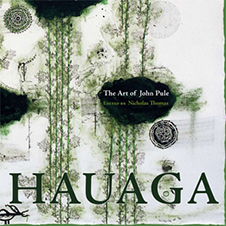 John Pule is one of the most significant artists living and working in New Zealand today. From the mid-1990s his powerful, enigmatic and personal paintings attracted great interest, and his work came to be widely shown. Famously inspired by hiapo, the innovative barkcloths of nineteenth-century Niue, Pule has been fascinated by the Polynesian past and present, but his work ranges far more widely, responding both to ancestral culture, and to the global terror and violence of our time. This is the first book to deal with John Pule's art. It ranges over his drawing, print-making and writing – he is the author of two novels and several volumes of poetry – as well as his painting. Essays by Gregory O'Brien, Peter Brunt, and Nicholas Thomas provide several routes into Pule's engaging and compelling works, considering his formation as a writer and artist, his meditations on life and loss, and the extraordinary architecture of his visual art. John Pule speaks himself, through an extended interview, and in a series of extracts from his poetry and prose. Published to coincide with the first major survey exhibition of John Pule's work, curated by the City Gallery Wellington, Hauaga provides an indispensable guide to the work of one of the most powerful and original artists of the new Oceania.

NICHOLAS THOMAS was born in Sydney in 1960. He has researched and written about history and culture in the Pacific since the 1980s, and is author or editor of some 25 books, including Oceanic Art (1995), Discoveries: The Voyages of Captain Cook (2003), and a collaboration with John Pule, Hiapo: Past and Present in Niuean Barkcloth (2005). He is Director of the Museum of Archaeology and Anthropology, University of Cambridge, and a Fellow of Trinity College, Cambridge.

'In this impressive volume, the first to deal with Pule's art, Thomas displays an impressive knowledge of his subject's culture and influences.' – Art News, Spring 2010.

'Hauaga describes the engrossing path of the artist that brought him to create this new originality in Pacific art, in a readable and aesthetically pleasing manner. I couldn't put it down.' – Nelson Mail, June 30 2010

'Hauaga contains good reproductions of some of this work, and the illustrations are benefited by the essays, first by Nicholas Thomas, director of Cambridge University's museum of archaeology and anthropology, who has a special interest in Pule's work; second by an interview between Thomas and Pule; and third by a thoughtful reflection by Gregory O'Brien on the competing creative forces in the artist ... The book is superbly designed and is a most valuable contribution to the literature of New Zealand art and artists.' – Otago Daily Times; Sat, 10 Jul 2010

'Hauaga is a distinguished example of ... an art book that is not a catalogue as such but is associated with a major exhibition ... The whole package is a worthy monument to one of the most vital, distinctive and engaging of contemporary artists.' –  Peter Simpson, Weekend Herald, June 12 2010

'It is a truly wonderful piece of publishing with the highest production values and ... it is a bargain priced way of getting 80+ Pule images!' – Graham Beattie, June 19, Beattie’s Book Blog

'This is the first dedicated publication about the artist's work and will be the most comprehensive publication on the work of a living Pacific artist.' – Scoop; May 18 2010.