The Story of Natanahira Waruwarutu
as recorded by Thomas Green 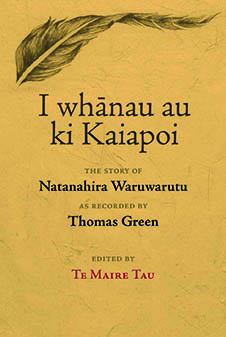 Natanahira Waruwarutu was a child at the time of the capture of Kaiapoi Pa by Te Rauparaha's Ngati Toa warriors in 1832. The early years of his life, recounted here in the original Maori text and an accompanying translation, saw great change in the Maori communities of Waitaha (Canterbury) and Akaroa.

Otako leaders set aside Moeraki, further south, for Kaiapoi refugees and Waruwarutu moved between the two places until he died in 1895. Before his death, he passed on to scribe Thomas Green, himself a Ngai Tahu elder, a substantial body of material that now defines modern understanding of the traditional history of Ngai Tahu. This manuscript was part of that material and, as Te Maire Tau describes in his introduction, has a history of its own.

The story in this book is not a Ngai Tahu 'Grand narrative'. As Te Maire Tau says, Maori history simply does not work like that. Rather, it is one narrative by a survivor of the period 'that recollects the reality of what he saw as a child; on this basis, it is a superb example of an oral tradition.'

The author has included a chapter on the historical context of Waruwarutu manuscript and annotations for both Maori and English texts. A further chapter presents in Maori with English translations a text recorded by scribe Charles Creed that supplements Waruwarutu's account of his induction into the Kaiapoi whare purakau (house of learning). It is one of the few manuscripts that provides a glimpse into a world that no longer exists.

TE MAIRE TAU is an Associate Professor of History at the University of Canterbury and Director of the Ngai Tahu Research Centre. He is the author of Nga Pikituroa o Ngai Tahu: The Oral Traditions of Ngai Tahu (2003) and, with Atholl Anderson, Ngai Tahu: A Migration History (2008).