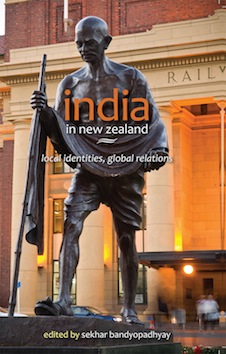 Indian people in 'bi-cultural' New Zealand have long been an invisible minority, rarely mentioned in our history books. This volume is a second contribution to remedying this historical silence, following the publication of Indian Settlers: The Story of a New Zealand South Asian Community by Jacqueline Leckie.

The first section introduces the context, briefly tracing the history of Empire and migration, which saw a few hundred adventurers from Gujarat and Punjab braving the seas and settling here in the late 19th century. Now Indians constitute the second-largest Asian–Kiwi group in our population (having more than doubled in number between 1991 and 2001). This increasing diversity has initiated a fresh debate on New Zealand's changing national identity, with the emphasis shifting from its bi-cultural foundation to greater recognition of ethnic minorities within the nation-space. The second section critically addresses the issue of a distinctive and uniform 'New Zealand Indian' identity and rethinks diasporic identity. In the third section, the Indian diaspora in New Zealand is looked at from a wider global perspective.

SEKHAR BANDYOPADHYAY is Professor of Asian History and Deputy Dean in the Faculty of Humanities and Social Sciences at Victoria University of Wellington. He has published extensively on caste and Indian nationalism and on the Indian diaspora in New Zealand.