The Story of a New Zealand South Asian Community 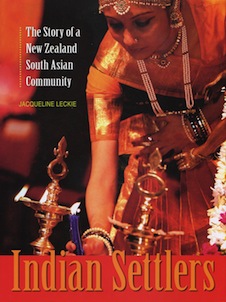 Indians have been present in New Zealand for over a hundred years, yet few New Zealanders would know their story. Who were these people, where did they come from, and what role have they played in the making of Aotearoa as it is in the twenty-first century? This book seeks to provide some answers.

The first gold discovered in Otago, which led to the rushes of the 1860s, was found by an Anglo-Indian from Goa, Edward Peters. The permanent Indian community can trace its origins to the arrival of two Sikh brothers, who arrived in about 1890. Most subsequent settlers were from the Punjab or from Gujarat, and some from Sind. Until 1945, most of the settlers were male, some intermarrying with local women, Maori and Pakeha.

The first Indian business, Abraham Singh & Co, was established in Wanganui in the late 1890s but since then settlers have applied themselves to full range of jobs and enterprises, from scrub-cutting to running fruitshops to dairy farming and professional work. Today people of Indian descent are a significant sector of New Zealand’s total population. Indian Settlers outlines this history, including many stories of individuals and families, and also looks at their settlement in the context of the wider Indian diaspora and the Nationalist movement in India.

JACQUELINE LECKIE is Programme Coordinator, Social Anthropology, at the University of Otago. She is the author of To Labour with the State: The Fiji Public Service Association (1997). Her most recent book is Asians and the New Multiculturalism in Aotearoa New Zealand (co-edited with Gautam Ghosh, 2015).

'Leckie has brilliantly captured the long journey between the arrival of those early scrub-cutters [in the late 1800s] and the 2006 appointment of Anand Satyanand as NZ's first governor-general of Asian ethnic origin.' – Waikato Times, Dec 2007

'Leckie is to be admired for the success she does achieve in treading a path among the varying requirements of scholarship, the Indian community and the general reader.' – Journal of Pacific History, December 2008

'This well researched and illustrated book is like a giant mirror that allows the reader a rare peek behind the familiar Indian restaurant, fruit store or corner dairy, or public cultural festival – into a rich history ... few of us would otherwise see.' Heritage Matters, Autumn 08